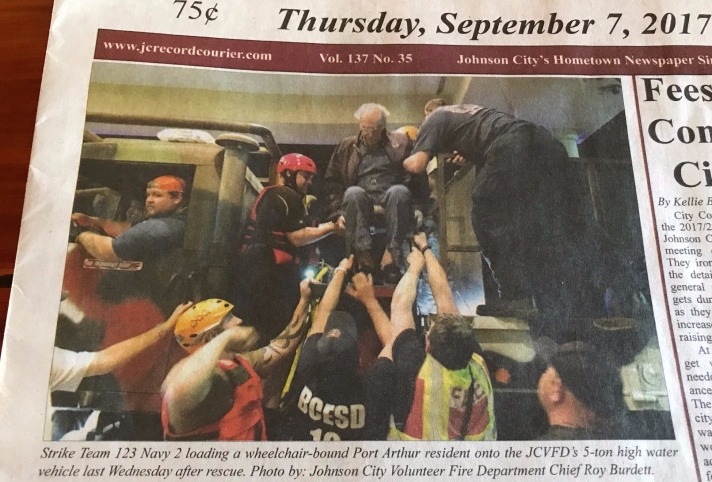 The caption on this photo from this week’s Johnson City Record Courier says that a wheelchair-bound resident of Port Arthur was loaded into the Johnson City Volunteer Fire Department’s high-water rescue vehicle in the wake of Hurricane Harvey. Small towns, big cities, churches, community groups, and Central Texas Indivisible groups are coming together to assist with relief efforts.

It is shameful that during this time of crisis, rather than reaching out to those affected, or even making a statement of support, District 21 representative Lamar Smith chooses to continue to divide us into two groups: Republicans and Democrats. This opinion piece was published last Monday, Labor Day:

It’s time for the GOP to go on the offensive

TX21 Indivisible has responded to this outrageous nonsense by calling his offices, writing letters, and creating one of our videos. View it here:

Lamar’s opinion piece, published on Fox News online, demonstrates once again that he does not represent us, our values, and principles.

First, people do not fall neatly into these two groups. There are many people in the middle. One-third of Americans consider themselves to be independent of either political party. These divisions do nothing to unite the country and foster bipartisan solutions to the complex issues faced by our nation.

Lamar also places himself firmly beside Trump when he calls out the “media” as an enemy of the American people. He does not define “media,” so let’s assume he is referring to social media as well as journalists reporting for newspapers, magazines, online publications, and television. Social media is defined as Facebook, Twitter, and other such outlets where anyone can publish their opinions and thoughts with little to no oversight. On the other end of the spectrum, there are reputable publications, or as the Founders called them, the free press. Here is the First Amendment to the US Constitution, which guarantees a free press:

“Congress shall make no law respecting an establishment of religion, or prohibiting the free exercise thereof; or abridging the freedom of speech, or of the press; or the right of the people peaceably to assemble, and to petition the Government for a redress of grievances.”

Professional journalists follow a code of ethics. They check their facts and strive to be fair when writing news reports. As Thomas Jefferson said in 1786, “Our liberty cannot be guarded but by the freedom of the press.”

In the middle of the spectrum between social media and reputable news outlets, there are outlets such as Brietbart and Fox News. These types of outlets make no attempt at fairness, feeding the hate that has created the Neo Nazi movement and has transformed our great country into a place where civil debate about issues is no longer possible.

NOW is the time to get involved in the work of the resistance! There are many, varied ways for you to contribute. We need your ideas, passion, and skills! Interested? Please email tx21indivisible@gmail.com and let us know how you can help!